Diane is a successful equine painter in Alberta. She paints commissions and sells her work throughout North America and Europe. She has traveled extensively to paint unique horses. She has observed and photographed the Sable Island wild horses off the coast of Nova Scotia and more recently traveled to southern France to photograph the semi-feral white horses that live in the wetlands of the Camargue region.

Presently Diane is focusing on the beauty of the soul of Iberian horses, many who have made the journey from Brazil, Portugal, and Texas to Alberta to her camera.

Her White Spirit bears are painted in the playful energy of the Great Bear Rainforest in British Columbia where she spent a week immersed in their ritual of salmon fishing before hibernation.

Her local landscapes of Alberta evoke the spirit of the land.

As an artist Diane works hard to integrate classical techniques, with contemporary color, no black, brown or gray. She captures impressions of light through layers of brilliant color, wet on wet until finished. Her images start as a stark light/shadow rendering of pure pigment, detail evolving on eyes, ears, nostrils; brushstrokes looser as they expand to surrounding areas.

Diane has a lifelong passionate love affair with horses. With this comes a knowing of the depth of the relationship one can have with the soul of a horse. In her work, she invites the viewer to experience this relationship at an intimate level.

ALL THE COLORFUL HORSES

The flowing, graceful lines of Alberta artist Diane Williams’ equine paintings belie an underlying power. The colors seem to dance across the canvas and her horses vibrate with a regal majesty. Williams, who has had a life-long love of horses, uses her brush to capture the essence or the inner-spirit of these powerful souls.

“I want my work to trigger strong, emotional responses,” Williams says. “For the viewer to feel as if she or he is entering the world of light the horses inhabit. I believe that these horses can help you heal or, perhaps, regain a sense of your inner exquisite self.”

Williams’ life provided her the perfect backdrop for pursuing her passions for art and horses. Growing up in British Columbia, Williams father Norman, was a professional photographer and her mother Alice, was a stained glass artist and painter. Williams’ aunt, Karin Storey, was an artist and art historian at Douglas College. This rich artistic heritage provided Williams a fertile creative childhood.

“My father gave me my first ‘brownie’ camera (yes, it was brown!) when I was six,” Williams recalls. “He introduced me to the concept of the rule of thirds, teaching me to place my subject matter into the one third, not the middle of the photo. Williams’ father made sure she received a rigorous training in classical photography, learning to focus on composition and the play of light. As she developed her interest and skill in art as a child and youth, her passion also came into focus.

The more time Williams spent with horses, the greater her passion became and very quickly the horse became her primary artistic muse. With encouragement from her family, Williams experimented with a variety of creative medium and developed her technique. Throughout her schooling she sought out art classes and was supported by her teachers. In high school, Williams was privileged to study under the tutelage of Ellie Pucher, an accomplished artist from Vienna.

She went on to earn her master’s degree in Art Education from the University of British Columbia and embarked on a teaching career of over 30 years, teaching high school art and photography classes.

While teaching, Williams continued honing her artistic skills by attending extensive workshops through the Federation of Canadian Artists in Vancouver, BC and also studying at the Vancouver Academy of Art. Perhaps most influential, Williams studied for seven years at the Sacramento School of Light and Color, where she was instructed and guided by Susan Sarback, artist and founder of the school. From Sarback, she learned how to use full spectrum colors while painting en plein aire.

“I think of riding as an art. This discipline expresses my painting,” She first studied natural horsemanship with Jonathan Field. She is currently studying with Karen Rohlf (Dressage Naturally) and is learning from the Classical French Dressage school of Dominique Barbier. Her style is infused with a Spanish flair, an extension of her previous flamenco dancing. "I seek the lightness and playfulness of the dance with my Andalusian mare".

Williams’ paintings have captured the imagination of viewers and collectors throughout Canada, the U. S. and Europe. Her work has been featured in solo shows throughout British Columbia, Alberta and the last three years at the International Calgary Stampede and last 5 years at Spruce Meadows-Masters trade show.


Your site is, Art in Canada without a doubt, the best for an artist to use as it is concerned about presenting the artist's work in the very best light possible at a very minimal cost for the artist. The hardest part of promoting one's own art is the great cost it involves for exposure. You have done an outstanding job! With artincanada.com I have had people from the other side of the world commission my work.

~ Ellen Cowie
Lynda, - Just a note to let you know what's happening with me. I've had some action because of ArtinCanada.com! I've sold 2-3 paintings lately because they found MY web-site via yours. And the Cow Palace Rodeo found me there and invited me to send work down for their Western Art Show in April. I really appreciate it, and thought you needed to know it!

~ Gena LaCoste
Lynda your Vision of Art In Canada and what it does for artists is fantastic!!! I find it truly amazing that you work so hard with artists in mind. Thank You!! Since joining your site I have realized a considerable increase in contacts directly from the home page with Art In Canada. Some of these contacts have generated sales and others are great potential customers. The site is presented in a professional manner and that is very important to me. I look forward to a long relationship with Art In Canada.

~ Diane M. Anderson Professional Artist
Art In Canada is simply fantastic. They redesigned my ancient website and turned it into something that not only has great visual beauty, which is crucial for an art based website, but also has great flow and navigation. They are absolutely committed to making sure you are happy. Terrific service and rare in this day and age.

~ Doug Levitt Professional Artist
In my entire experience with the business world, you are by far provide the BEST in customer service. And I mean this sincerely. I know you are very busy and put in long hours, but you still take that extra minute or two to correspond with and actually converse with your customers! That is so rare today. And you are doing this long distance! Not even face-to-face!

~ Richard Wong
I have been very pleased with the Art In Canada website. I've been contacted by both Art dealers looking for artists, and individuals who have visited the site. When showing at various locations, it has been helpful to be able to direct potential buyers to the website, so they can see more of my work I would not necessarily have at that particular show. I found Lynda to be most helpful and very patient in setting up my site.

~ Nancy Osadchuk
I have had some pretty amazing developments from my association with the Art In Canada web site. There have been numerous inquiries from interested buyers each year but the most significant is the call I received from a Gallery who now buys my work. This Gallery deals exclusively with Canadian artists and I am now in my second year dealing with this very high end Art Gallery. I really value my association with Art In Canada.

~ Ken Curley
Dear Lynda, So guess what?! I didn't make it to the post office until Tuesday with your cheque and I received a message Monday morning from a man who saw me on Art in Canada and bought a bronze. I delivered it yesterday. It was sending me clients before I even had paid you. An old friend that I have lost touch with contacted me this morning as well from the site. How wonderful and thanks again for all of your hard work on my behalf! I thought you would like to know. Best to you.

~ Donna Wilson Bronze Artist
Before Lynda put my website together we were floundering on the internet. I am constantly receiving emails about the work as a result of people seeing the work on "Art in Canada" and my website. It is certainly worth every penny to spend on a great quality site.

~ Andrew Kiss Professional Artist
Lynda's commitment and dedication in assisting us has made it very easy for my husband to maintain and update my website when necessary. Lynda is always there to answer any questions or concerns we may encounter. Her approachable personality and public relations skills are a great asset. On a scale of 1-10 she is definitely a 10+.

~ J. Gaudet Professional Artist
Among all of the websites that I have joined I can honestly say that Art in Canada is the most pro active website based on the reports and this truly explains the genuine quality service and design of their website and also the knowledge of reaching out with ease to those in search of true Canadian art.

~ Denis Mayer Jr. Canadian wildlife Artist
Lynda, thanks for all your help in setting up my website and now this new AIC web platform to help me market my work! I have already received an inquiry from my AIC homepage! Since having had you design my web site I am finding an ever increasing amount of online inquiry which are leading to sales and commissions!

~ Vance Theoret - Stone Carver
Dear Lynda; I just wanted to thank you putting together the Art In Canada web site. "Since I have been online with your organization I have been selling more volume of original oil paintings per month than I ever thought possible." And the orders are coming in not from just Canada, but from all over the world! Thank you so much! 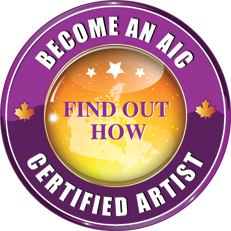